What's on tap at the

The Highwayman is a Bitter Ale.

rebelliously dark copper ale with hints of toffee and a slightly fruity bitter-sweet aftertaste. Our take on this old recipe is inspired by the Hertfordshire Highwayman, James Snooks (1761-1802) who became the last man in England to be hanged for highway robbery on 11th March 1802. Snooks, a resident of Hemel Hempstead, Herts, was convicted of robbing a post boy on Boxmoor Common, and the scene of his crime became the place of his execution and subsequent grave. A memorial plaque was placed there in 1904, and Snooks had a bar named after him in the town.

The Classic English Ale is a Amber Ale.

Deep amber colour, a light hoppy aroma and a rich and rounded malty taste balanced by subtle hoppiness to give a supremely clean, smooth and refreshing ale.

The Pale Ale is a Pale Ale.

Designed as an aperitif or as a drink on its own. Relatively light in colour, with a creamy smoothness, it has a good definition on the palate and a refreshing, cleansing finish.

The Lekker is a Light Amber Ale.

Brewed to a summer ale style using lots of English hops, it has a crisp bitterness, complimented by caramel and malt, making this a light, smooth ale to enjoy any time of the year.

The Marula Matata is a New England IPA Ale.

Based around the legendary Marula fruit, this is a New England style IPA (NEIPA), a style of IPA that is known as “Hazy Juice bomb”. Unlike the usual IPA styles, NEIPAs are low in bitterness but have huge levels of juicy hops making the beer hazy and this is encouraged with the use of Wheat and Oats which also give the beer a luscious, smooth mouthfeel

The Oatmeal Stout is a stout Ale.

A rich , satisfying stout brewed with oats that invites you to take one quaff after another .

The Chiltern Black is a Porter Ale.

The Blind Poet is a Porter Ale.

A creamy Milk Stout with all the brilliant flavors of Neapolitan Ice Cream in one glass. Taste the rich flavors of chocolate, vanilla and strawberry in this unique beer

The Marula Matata is a New England IPA Ale.

Based around the legendary Marula fruit, this is a New England style IPA (NEIPA), a style of IPA that is known as “Hazy Juice bomb”. Unlike the usual IPA styles, NEIPAs are low in bitterness but have huge levels of juicy hops making the beer hazy and this is encouraged with the use of Wheat and Oats which also give the beer a luscious, smooth mouthfeel

The Monks Pils is a Craft British Lager Lager.

Brewed using a unique mashing regime matching those of the continent with Pilsner malt. Saaz hops are used from the Czech Republic and then the beer is fermented cold and slow over 3 weeks using yeast brought over by Tomas Mikulica, Head Brewer/Owner of Pivovarsky Dvur just outside Prague.

The The General is a Dry Cider.

It is bold and satisfying with notes of Seville orange, plum and baked apple, rich and rewarding with a long, warming finish.

The Bee Sting Perry is a Perry Cider.

Sweet but incredibly refreshing with a glorious fresh tasting pear flavour and a wonderful pear aroma.

The Black Dragon is a Medium Dry Cider.

This special reserve cider has been crafted exclusively by Gwynts chief cider maker to a secret recipe which is kept under lock and key! Rich in colour, body and flavour with a fresh, fruity aroma.

The SOMERSET SCRUMPY is a Fruit Cider.

Made with a blend of bittersweet cider apples this is a very traditional unfiltered cider. Perfect for those that like a medium Somerset cider, Full-bodied and full of character. Fermented completely dry then sweetened only with sweetener making this a great medium cider for those that can't have sugar

The Mango is a Fruit Cider.

The Pina Colada is a Fruit Cider Cider.

You’ll never get caught in the rain with this deliciously fresh and cool Piña Colada cider. Pineapple, rum, and coconut are all blended with our crisp Somerset cider. Escape with this smooth, sweet and summery delight. Perfect when served over ice with a fresh pineapple wedge to garnish

My personal love for real ale began by accident at a CAMRA beer festival in St Albans. The concept of a micropub called Monks Inn was born in February 2018. The motivation stems from frustration truth be told. The lack of variety of quality cask beer in the established pubco or brewery pubs was the major driving factor. There are so many absolutely brilliant and skilled micro breweries around who still brew for love of beer. People who are passionate about what they do regardless of the fact that they don’t have umpteen pubs who are tied into them.

Our affiliation to the real ale and cider industry began in grass roots rugby with legendary landlords by the names of Karen and Craig Douglas. They owned a little pub in London called The Bree Louise. Sporting 24 cask ales and 11 ciders, it’s easy to see why I was so spoilt with quality and choice. The Bree was my only stop off on way home to Watford Junction where I lived, and also coached mini rugby at Watford Rugby Club. I was most perturbed by the fact that Craig, being an ex Harlequins player, had no place to take his then 10 year old son. Watford being 17 minutes away was an easy invite. Next thing I know we are running an annual real ale festival to raise cash for this tiny club.

Second thorn in the side was the flashing lights, questionable doof doof music (as I call it) and get drunk fast on cheap bilge culture. Inevitably an environment that invites xenophobia, racism, sexism, homophobia, intolerance as a whole. I was looking to emulate the ethos I found at the Bree with traditional roots. Drink beer the way monks invented it to be drunk. Serve it in the way it’s designed to be served. Uninterrupted, pure, blissful cask beer.

Committing to a pubco or brewery pub with no experience was a definite no no. My personal opinion is, this is a major contributing factor to the massive closures of pubs in the country. It is so difficult for a publican to make a living when they are restricted and tied to the mainstream companies. And the reason you drink the same beer in every other pub. It was not good enough for me. So, motivated by my cousin and brother Desmond Whitaker, we converted an old Jennings Bookie, got the right licencing approvals and opened our doors on the 9 th November 2018.

The pub was an immediate success with ‘Best Newcomer’ awarded to us by CAMRA after three months of trading. A year later we were awarded Best Pub by CAMRA Mid-Chiltern Branch and we are now in the Good Beer Guide. The 10 cask beers (five gravity and five handles), along with six still cider handles, a decent gin collection of around 30 gins was a big hit. There are no permanent beers on. We change it up every week and the selection is whimsical and random. It’s a beer festival every week. And everyone was welcome to our austere ‘monastery’. Bohemian hippies, gothic rockers, LGTBQ community, beer tickers and pensioners all converse and talk with each other. We champion charity causes with our neighbours The Salvation Army and we idolise the work our NHS Angels do. Policemen, Firemen and serving Armed Force members all enjoy special discounts, as does our pensioners and CAMRA members (outside of Covid Survival Mode). We have a tribe who call themselves ‘Monkonians’ and we are a family.

80% of our beer is sourced within a 30 mile radius we do bring in beer and cider from all corners of our beautiful country. You will find our products are proudly British with a hint of South African. We have a decent wine selection with Rum starting to creep in as the next Gin fad.

When permitted we hold very decent comedy and quiz nights with talented acoustic sessions on the weekend. Come and join our family. You will feel the love and serenity. 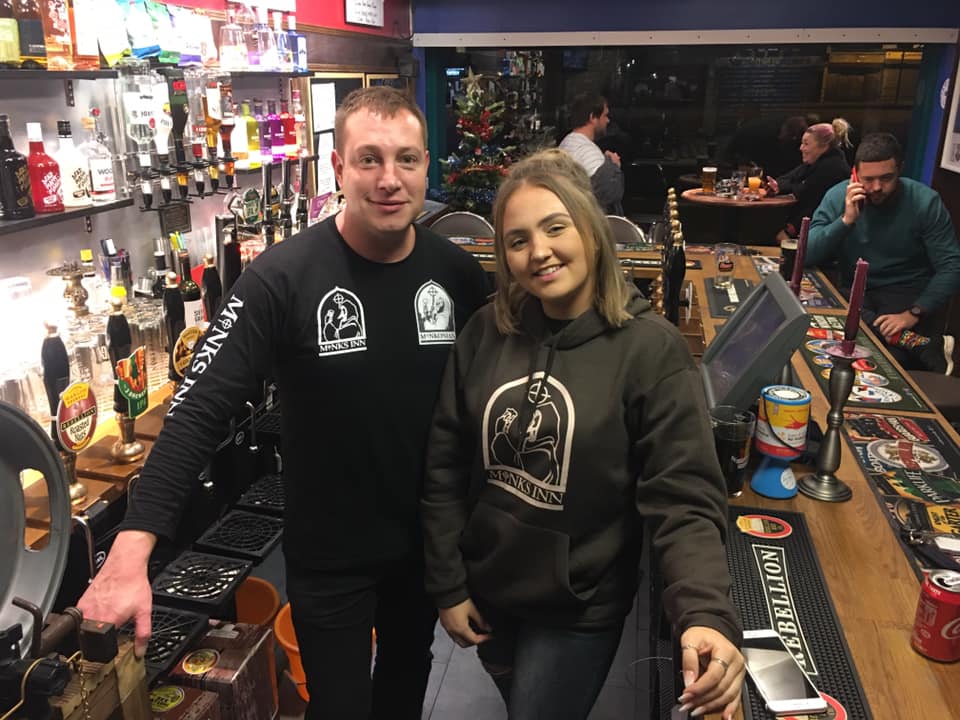 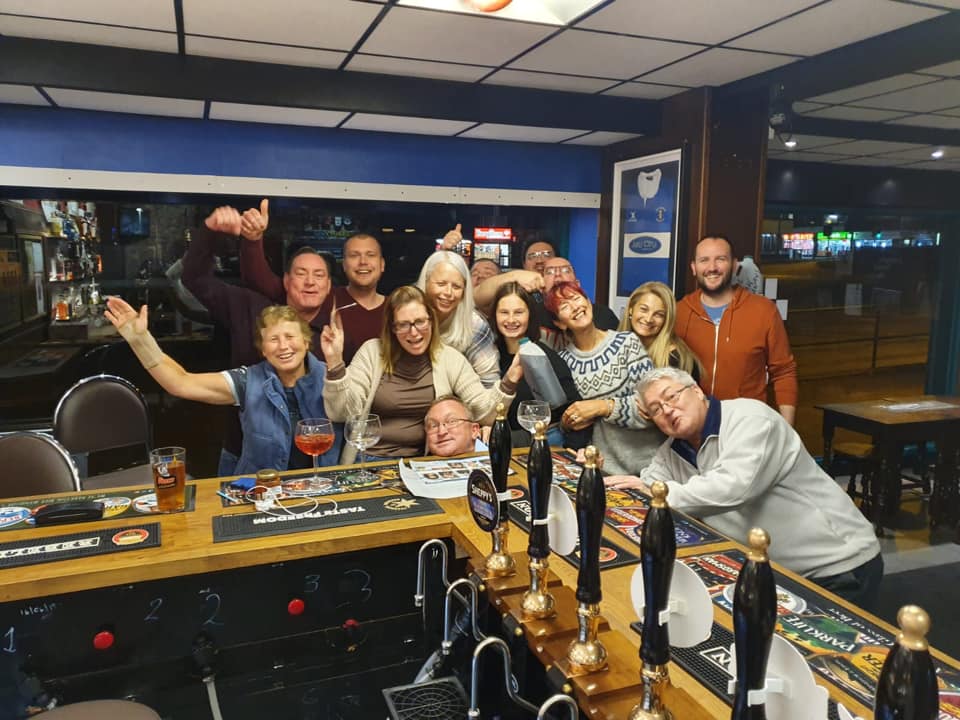 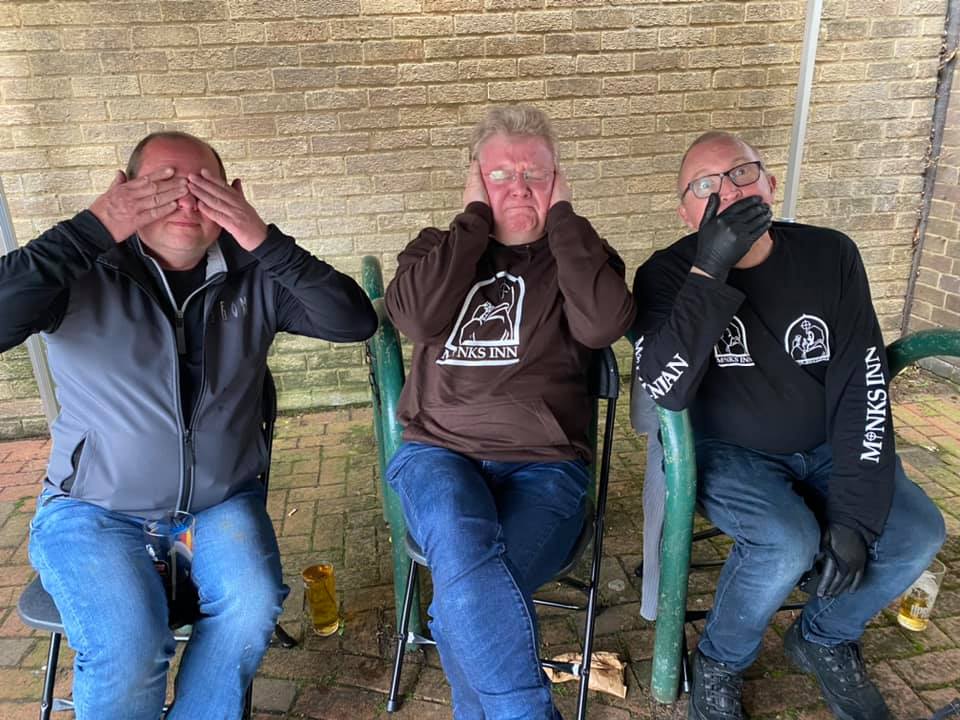